Just weeks on from the savaging of Tropical Cyclone Debbie, a weather event described by the Insurance Council of Australia as ‘a catastrophe’, Elite Carpet Dry Cleaning franchisees are still doing what they can to make homes liveable and get businesses—including holiday rentals—back operating.

The cyclone then continued south-west, dumping more than 1000mm of rain in hours, causing Mackay’s Pioneer River to burst its banks. And still #TCDebbie continued south and inland…

Flood waters are only now starting to recede in the central Queensland city of Rockhampton.

Elite Carpet Dry Cleaning franchisees in the Whitsunday/Mackay area say their priorities have been water extractions.

Shaun Tucker and his crew of 4 worked on 40 properties in 58 hours over 4 days across Mackay.

Shaun removed 150 litres of water from the lounge room of one care facility.

“The rain was coming in with such force from the wind, it was hitting windows sideways and forcing its way through gaps in sliding doors.” 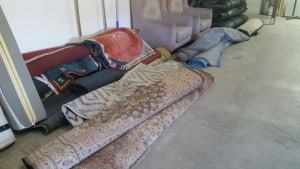 Drying efforts–all the more urgent because of the high humidity creating ideal conditions for unhealthy moulds to grow–were initially affected by power outages: about 63,000 people across Mackay and the Whitsundays were left without electricity.

“We’ve tried to help as many people as possible, to get their carpets dry and their homes to a liveable standard,” says Shaun who relief on generators and 40 hired carpet blowers for initial emergency dry-outs.

Airlie Beach bore the brunt of #TCDebbie. Corrina says while many roofs were lost, much internal water damage appears to have come from roof gutters clogged by leaf debris; the backed-up water finding its way inside.

“I saw curtains of water cascading down walls,” says Corrina.

“We’ve had dozens of calls from real estate agents looking after rentals, wanting them cleaned up so that they can be leased again.

“We’ve finished cleaning up one of the bank branches whose doors were blown in: upholstery was already moulding.

“In due course we’ll see curtains, household upholstery and rugs – we already have 30 waiting to be cleaned.

“We’re quite overwhelmed and exhausted but soldiering on because we have to get Airlie Beach and surrounds up and running, open for business,” says Corrina who personally would just like a warm shower (her own home is still without power!)