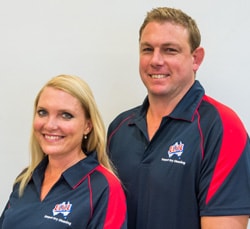 Back in 2003 Tom Pickford was president of the Cobras Aussie Rules club in Cairns (now called the Cairns City Lions), as well as the Elite carpet cleaning franchisee for the area. He picked up the phone one day and it was Steven Diehm, a state and premier league player in Brisbane looking for a sea change.
That was the start of a long career for Steven at the club, first as senior coach and then later as captain of the team. Steven only officially retired this year (at the ripe old age of thirty seven) to ‘make way for the young blokes’.

“When I came up to Cairns, I started working part-time for Tom on the bigger commercial cleaning jobs.” explains Steven. “As time went by we talked about our plans and Tom told me he wanted to find someone he knew and trusted to take over the franchise when he was ready to retire. We went into partnership in the business first and on 1st July this year Kylie and I officially took control of the franchise.”

Elite in Cairns does work for some of the major local businesses, including the Reef Hotel Casino as well as the Cairns domestic and international airports. The business has an even split of commercial and domestic work and, on the domestic side, the work comprises standard carpet cleaning work and upholstery cleaning, again with a 50/50 split.

As a holiday and conference destination, Cairns generates a fair amount of cleaning work, especially between September and November.

“September to November is the football season and we get a lot of football trips coming up here.” says Steven. “And you can probably imagine the sort of cleaning work we have to cope with as a result. The cleaning job that sticks in my mind – not related to the football season, though – was when two men and one woman had an altercation in one of the hotel rooms – the room was a complete mess and we just had to go in there and get the job done. Which we did of course.”

Steven met his wife Kylie when he came up in 2003 and they now have three children. She is a schoolteacher and works one day a week in a local school.

“The great thing about this job is that, even though it’s hard work, I do get to see my family. Not everyone can say that.” he says.