Looking at a Roomba robotic vacuum cleaner quietly zipping around a floor picking up dirt and grime, it’s hard to imagine a time before carpet cleaners and vacuum cleaners existed, but in fact they are a relatively new invention, the first motorised vacuum cleaner being invented by a chap called Hubert Cecil Booth in the UK in 1901.

Prior to that keeping a carpet clean was an arduous task, in fact at least two arduous tasks, depending on whether you just wanted to remove the dust and soot from the carpet, or whether there were any stains that needed to be removed. If the carpet or rug was not too large, it was commonplace to take it outside and beat the dust and grime out of it. If you had a stain to deal with, you might use an old ‘tried and tested’ remedy such as scrubbing the carpet with some lemon juice and a loaf of bread fresh from the bakery. The carpet then had to be rinsed and left outside to dry.
Some householders didn’t bother cleaning their carpets at all, preferring to use what were called ‘druggets’, in other words heavy undercloths used under tablecloths and laid out on carpets to catch any spillages before they got on the expensive carpet itself. Good at preventing stains, but not that hygienic and the whole idea of having a beautiful carpet permanently covered up by an ugly wool covering somewhat defeating the purpose.

So when Mr Booth invented his carpet cleaner, a whole new era began. To be technically accurate, there were some suction based devices marketed as carpet cleaners in the US before Mr Booth invented his, but these relied on hand pumps to suck up the dirt and were pretty hard to use – Mr Booth’s invention, called the ‘Puffing Billy’ was the first to be powered by a motor, in this case a petrol engine. He first struck on the idea for a vacuum cleaner when he went to a demonstration of an American machine in London, probably John Thurman’s ‘pneumatic carpet renovator’, which blew dust off rather than sucked it in. After a quick experiment putting a handkerchief over his mouth and sucking dust and dirt off a restaurant chair, Booth knew he was on to something.

Puffing Billy was not sold as a cleaning device, instead Booth set up a cleaning service (called predictably the British Vacuum Cleaning Company) equipped with the machines. They were pretty heavy and sat on a horse drawn cart while long hoses were dragged into the houses that needed cleaning. Booth later swapped to electric power and coined the term ‘vacuum cleaner’ in 1901.
Just a few years later in 1905 Walter Griffiths in Birmingham, UK built the first portable cleaner, the ‘Griffith’s Improved Vacuum Apparatus for Removing Dust from Carpets’ (imagine going into a shop and asking for that). It wasn’t powered so the poor user had to operate some bellows to get it to work.

Two years later a janitor in Ohio, James Spangler, invented a motorised version with an electric fan, a box and a pillowcase. He sold the patent in 1908 to a certain William Henry Hoover and the rest as they say is history.

In Europe companies like Fisker and Electrolux improved a little on the basic design, the latter inventing a machine that sat on the floor with a tube attached, instead of the normal upright devices.
Apart from some technological advances, such as James Dyson’s cyclonic vacuum cleaners, the basic principle of sucking the dirt out of the carpet remains unchanged today.

At Elite we use industrial grade vacuum cleaners that remove a high percentage of the dust dirt and grime and restore carpets back to (almost) their original condition, as long as they haven’t been stained or worn. But that’s another article! 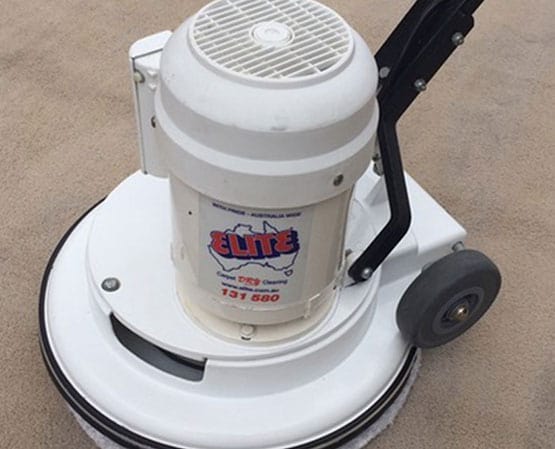