Mention Tamworth and the first thing that springs to mind is ‘country music’, and so it should be, as the annual Tamworth Country Music Festival, held in late January, is in fact the second largest country music festival in the world. There is more to Tamworth of course than country music, and following a close second is its connection to the world of horses – it is the “National Equine Capital of Australia”, boasting the biggest building in the southern hemisphere devoted to equine events, the Australian Equine and Livestock Events Centre.

The town is named after its namesake in Staffordshire in the UK and the connection is the Peel River that runs through the town, in its turn named after its MP, and British Prime Minister Robert Peel, probably best known for setting up the first police force. Today Tamworth NSW is home to around 48,000 people. 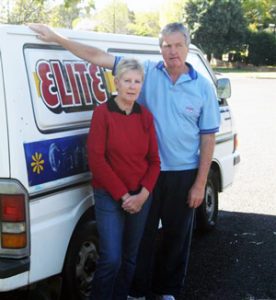 Since July 1990, Elite franchisee Gary Owen has been keeping the carpets and upholstery of the inhabitants of the town clean and smart. In fact, Gary’s patch isn’t just restricted to the town itself, he actually covers an area around 200kms across, and it takes nearly three hours to get from one side to the other. As you might expect, like his colleague Greg in Goondiwindi he also occasionally has ‘kangaroo problems’ while driving around his territory, particularly during dry periods.

Gary is one of the longest serving Elite franchisees, having been running his franchise for around 25 years. Prior to joining Elite he was working as a loans office in a bank and says he ‘just felt like a change’. Although his work is mainly residential, he does do some commercial work, although he has noticed a few changes over the years – not so many multi-occupancy buildings have as much carpet as they used to in common areas, hard flooring is quite popular now, and short pile carpet is much more popular today than it was – long pile is definitely out of fashion (maybe it’s in for a resurgence?).

Strangely, the country music festival is quite a busy time for Gary, but maybe not for the reason you might expect…

“Quite a few of my local customers try to stay out of town during the festival – it’s too busy and the traffic is pretty bad.” he says. “Instead they stay at home and perhaps that’s when they notice their carpets aren’t as clean as they should be, and they call us in to get their carpets cleaned.”