Stephen and Pamela Dury – owners of the Elite franchise in Bathurst – were recently recognised by Elite as 2015 Franchisee of the Year – the second time they have received the top award since becoming franchisees in 2004. The first time they won was back in 2007, just three years after taking over the business. So, what makes a double award winning franchisee? 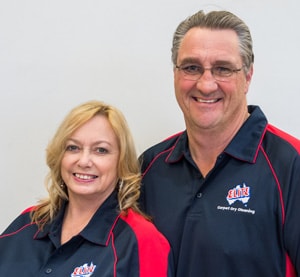 Stephen wasn’t always in the carpet cleaning business. For 29 years he worked for the NSW State Government involved in aerial photography for land mapping, helping to produce comprehensive maps for state and regional projects. Towards the end of his time working there they began introducing digital photography and had started the big job of digitising all of the old parish maps in the state.

Much as he loved the work, it took Stephen twenty-one years to realise that he wasn’t really a fan of the red tape involved in working in government departments, and so he started looking around at what sort of business he could run with Pamela. After looking at a lot of franchised businesses, he came across Elite and realised – given his penchant for attention to detail – that the business suited him down to the ground. And so it’s turned out! Stephen and Pamela bought the business in 2004 and have grown it steadily since.

The business services a large area from Lithgow to Orange to Cowra, and of course Bathurst itself.

“When we bought the business we had a simple motto – we wanted to treat our customers exactly the way that we’d want to be treated.” says Stephen. “We really just wanted to do the right thing by our customers, do the best job and charge the right amount.”

Stephen and Pamela’s customers are primarily residential as opposed to commercial, but like most Elite franchisees they do their fair share of end of lease cleaning jobs as well.

They both take great pride in the work they do. In one instance the daughter of a customer of theirs had spilt a cream on the carpet and it had bleached the colour out of it, just as the customer was preparing to sell the house. Although still not perfect, Stephen managed to get most of the bleach stain out of the carpet, and after she sold the house his customer made a point of thanking Stephen for his work, saying that it had helped her sell!

Although of course Stephen and Pamela do carpet cleaning for anyone who needs it, they find most of their work in two age groups…

“Funnily enough, our best clients are generally at either end of the age spectrum. We do a lot of work for young families, not that much for families with older children, and then quite a lot for retirees and older people. Maybe the families with teenagers get their kids to do the cleaning, or perhaps they just give up altogether!” says Stephen.

When they’re not working in the business, they are kept busy by their six grandchildren and Stephen likes to get in a round or two of golf when he can. Pamela is also the chairperson of wildlife rescue organisation WIRES in the Central West and it’s not unusual for them to have the odd wild native animal staying with them as well – current residents include a walleroo and a microbat!