George Pullen, who is Elite franchisee for the Gold Coast and Tweed Coast with his wife Rebecca, is surely one of the very few carpet cleaning and pest control business owners anywhere to be the recipient of a Premier’s Award.

Prior to starting his career with Elite at the turn of the century (2000), George was working for the government Department of Natural Resources, mainly in remote and rural areas, part of a team from 1995-1999 involved in the preventative control of plague locust populations. 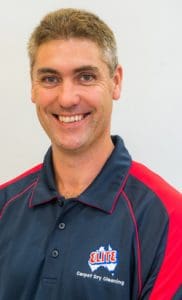 He also holds a Bachelor of Applied Science in Natural Systems and Wildlife Management from the University of Queensland, so when you’re talking to George about pest control you know you’re getting the right advice.

He received the Premier’s award for a project he led researching locust control, and was also involved in the co-ordination of a large broadacre mouse control project in 1995 throughout the Darling Downs and Western Downs – not that too many of his customers these days have these sorts of problems!

The reason he left his government job was simply that the travel side of things made it pretty hard on his young family, so he decided to take a job closer to home with his mother and father in law, who were then the Elite franchisees for the area.

He worked as an employee for around seven years and took the opportunity to buy the business from them when they decided to retire in 2008. Now George runs the franchise for an area that stretches from Ormeau in the north to Mullumbimby in the south and Mount Tamborine in the west, across NSW and QLD.

George’s business is a mix of residential and commercial work and he offers pest control in addition to carpet cleaning services. He has a carpet specialist on board who is also trained in pest control, so Elite can offer a seamless service to householders and businesses.

“This year has been the best start to year I’ve seen in a long time, and December was absolutely crazy.” says George. “We’ve been non stop so far with both pest control work and carpet cleaning work, which is great. But that doesn’t mean it isn’t a competitive industry though – it’s fiercely competitive. And the winners are always the customers, certainly when they come to us!”

Although both carpet cleaning and pest control technology has changed over the years, with some new pest detection equipment coming online recently, George says that the approach remains the same, with service a vital component.

George continues to be a recognised expert on pest and termite control, delivering presentations at major industry conferences as well as giving lectures on pest plant and animal management to Natural Systems And Wildlife Management Degree students at the University of Queensland while working for Dept of Natural Resources.

When he’s not on duty, George enjoys taking time out with his family to go fishing and waterskiing – one of the luxuries of being five minutes away from the beach on the Gold Coast!