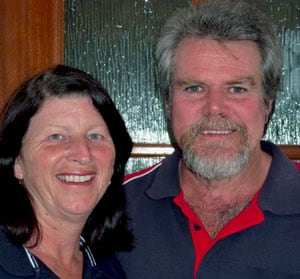 The Fraser Coast is situated roughly 250km North of Brisbane and incorporates Maryborough and Hervey Bay. It is very pretty, with many heritage listed buildings, and was briefly the largest port in Queensland, seeing a huge number of immigrants arrive in Australia, as well as a lot of Australian produce such as wool, meat and timber leave the country destined for Britain and other export markets. Hervey Bay is best known for the whale watching trips that operate from there, and as the access point for Fraser Island.

Stephen Ross and his partner Kay run the Fraser Coast franchise of Elite Carpet Cleaning. Stephen joined Elite in 2003 after 26 years as a fitter and turner, at first working in the sugar mills and then working in the railways, building the tilt trains – a sea change if ever there was one.

In those eleven years he’s seen the region go from strength to strength and has witnessed a population explosion – a quick check on the web shows that the population has grown from 78,000 in 2001 to 97,000 in 2013, the 6th highest local government area growth rate in the state.
When he first started most of his customers were older people who had moved to the area when they retired, but now the Fraser Coast is home to many people who work in the mining industry, many of those on a FIFO (fly in fly out) basis. Although the number of carpet cleaners in the area has increased in the time he’s been running the franchise, so have the number of people who can afford to pay for regular carpet cleaning, as well as a big increase in house rentals, and the cleaning required when these rentals change hands.

“Although there are some jobs I’m not that keen on – 3am cleaning jobs not being my favourites, we do get immense satisfaction when we’re congratulated on a job well done.” says Stephen. “We specialise in real estate rentals and some of these can get incredibly dirty. With a combination of the products we use and our experience, we’re able to get these coming up looking very good indeed, and when we do that, we see some very pleasantly surprised looks on the faces of our customers.”
“I do miss the four weeks holiday a year that I used to get as an employee,” Stephen adds, “but now I have the satisfaction of owning my own business, which more than compensates.

We enjoy running a business where we can help people in their hour of need, whether it’s emergency flood restoration work, which we do on a 24 hour callout basis, or something just to make their place look better, like our ultrasonic blind cleaning service, which takes the hassle out of cleaning blinds, and does a better job than you can ever do with a cloth.”

And the one things that would make Stephen’s job a little easier? A lighter dry cleaning machine. The current models weigh in at a hefty 38kg.