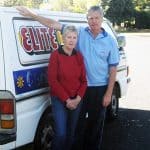 Having started way back in July 1990, Gary Owen is the Elite franchisee currently ensuring carpets and upholstery in Tamworth area remain fresh and pristine.

Actually, Gary’s business territory isn’t limited to the town core – it extends out to include a massive stretch of land some 200kms wide that takes around three hours to cross from edge to edge.

After operating his franchise for close to 25 years, Gary has earned his position as one of Elite’s longest serving franchisees.

Before that, Gary had been a loans officer in a bank, which he left because he “just felt like a change”.

Although Gary’s present work is mostly residential, he still takes on some commercial jobs and has noted changes in both over his many years in the industry – multi-occupancy buildings are sporting less carpet, hard flooring has experienced a surge in popularity and short pile carpets have replaced long pile in trendiness (though perhaps long pile is about to make come-back?).

Given the large area that Elite Tamworth services, Gary sometimes encounters trouble from kangaroos while out on the roads, especially if it hasn’t rained for a while. 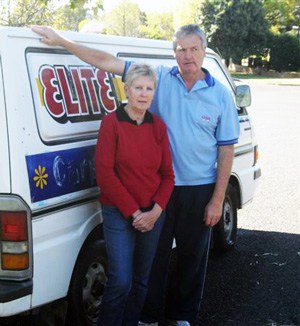 The name ‘Tamworth’ alone can bring thoughts of country music – understandably so, considering that every January Tamworth hosts the second largest country music festival worldwide. Not that Tamworth is only about country music – it also earns its title of ‘National Equine Capital of Australia’ by being home to the largest building in the southern hemisphere dedicated to horses – the Australian Equine and Livestock Events Centre.

Oddly enough, Tamworth’s annual country music festival brings a rise in business for Gary, but you might not guess why…

It’s been noticed that, for the duration of the festival, a lot of the locals avoid going in to town to stay clear of heavy traffic and general heightened activity.

“Instead”, Gary says, “they stay at home and perhaps that’s when they notice their carpets aren’t as clean as they should be…” which means calling in the professionals at Elite to get the job done properly.