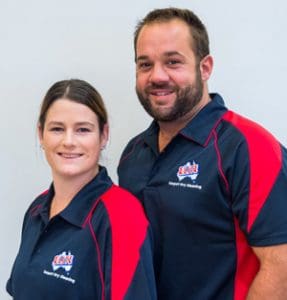 David Lowry took on the Elite franchise in Mackay back in 1996 and has consistently been one of the top performing offices in Australia for the company. This year, after eighteen years in the business, he has decided to move on and this month the new owners, Shaun Tucker and his wife Nicole, took over the business, exactly eighteen years to the day from when David first started.

Shaun, who has been working in the mining industry for the past six years, first heard that the business might be on the market through his family – his brother is married to David’s daughter. Although not specifically looking for a business opportunity, he discussed the idea with Nicole and they decided that it was the right move.

Located nearly a thousand kilometres north of Brisbane, Mackay has a humid subtropical climate, with often a 2-3 month wet season, which naturally causes some challenges keeping carpets clean! Add in to the mix the occasional flood work and water damaged carpets and you can understand how Elite Mackay would be kept pretty busy at this time of year.

The franchise services Mackay itself and customers within a 200km radius of the city. The work is a mix of residential and commercial, including residential aged care facilities and quite a bit of rental vacate work with workers in the mining and sugar cane industries transiting through the city.

“Both Dave and I have noticed that people are now happier to get a service business like Elite to come in and do the carpet cleaning work that in the past people might have done themselves, which is great for us.” says Shaun. “The other interesting thing we’ve noticed is that people often aren’t aware of other cleaning services we provide, so we make sure we point these out. We get a fair bit of blind cleaning and leather upholstery cleaning jobs this way!”

Judging by the backgrounds of some of our franchisees (see this story), it looks like Elite could probably field a pretty good rugby side. Shaun has just retired from a 15 year career in A Grade Rugby Union, having captained the Mackay A Grade team and played professionally in Canada in the 2005-2006 season.

Since his retirement from the rugby world, he now has a little more time to go camping and swimming with his wife and three young kids. And Dave Lowry is looking forward to having a month off, his first break longer than two weeks in 18 years!